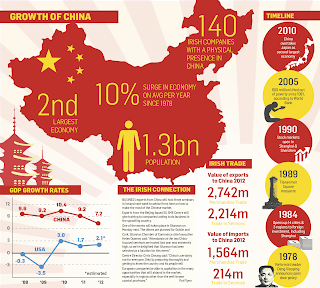 Posted by Jennifer Chan at 10:47 PM No comments:

In America on December 25th, everyone is celebrating Christmas.  The houses are decorated inside and out with sparking light and Christmas decorations, and the presents is piled high beneath the Christmas tree.  Even new immigrants who are foreign to the concept of Christmas learn quickly what Christmas is all about.  So how has that influence other countries across the world?  I can't say for every country, but I do know China has caught on with the Christmas spirit.

1.  Christmas Decorations all over China


2. Younger people in China have been more accepting of Christmas, they even go out of their way to celebrate it themselves.
3. Chinese that normally do not attend church decided to attend the Christmas Mass because they are curious. 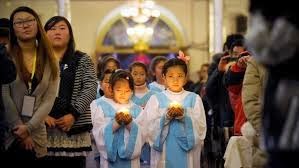 If you are interested in more about Christmas in China, here is a really good blog I found regarding more ways how Christmas/Christian religion have influenced China.  Here is also more pictures a popular newspaper in China "People's Daily" have posted on their website
Posted by Jennifer Chan at 12:44 PM No comments: 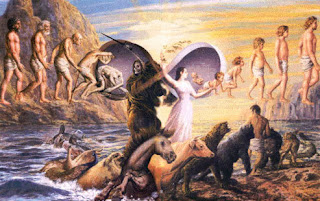 Both Karma and Reincarnation are a fundamental belief in Buddhism.  Below are my definitions.

Reincarnation -  Rebirth.  Unlike Christian believes where after a person dies they go to heaven or hell, reincarnation is where the cycle of life that takes a soul out of a dead body into another form back to earth.  The point of Reincarnation is not to live over and over again on earth, but to go back and relearn the lesson that wasn't learned, to change the negative feelings such as regret, sorrow, hurt, in the previous lifetime.  And Karma ties with reincarnation as it dictate what lessons you need to learn, therefore in where and what environment you need to be living in to learn it best.

Karma - Karma is the law of moral causation.  To simplify based on a western philosophy, it is best defined by fate that is a result of good or bad actions.  If you do good then your fate is good and the result of an event(s) is positive where life is easier to navigate, but if you did bad then fate needs to take you through a rough patches so you can learn a lesson from it.  Karma is the result of our own past actions and our own present doings.  It teach us we ourselves are responsible for our own happiness and misery. We create our own Heaven. We create our own Hell. We are the architects of our own fate.

In Karmic ties between friendship and relationship, a strong bond is formed to either work together on an issue where the reincarnated souls need to resolve, or to work together to bring about something.  Because the result of Karma can be bad or good, It is very easy to classify bad Karma as negative in today's Christian beliefs, and that is wrong.  In fact people can learn more from bad Karma than good, since it is so strong.  No Karma is negative, it is just lessons that needs to be learned and levels to reach.  It is almost like a video game, with the ultimate goal for your souls to come in perfection. 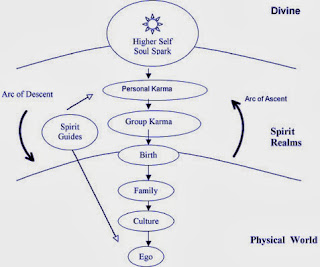 As you can see you can have Karmic Relationship with just about anyone.  You can even have Karmic relationship with your pets.  When I went to Pets Mart to adopt a cat after my previous cat died, I picked a "Garfield" look alike cat named Joey without any hesitation.  And he has stayed by my side since, sleeping on my bed, be there when I get scared or needed comfort.  He is still an adult in cat years, but the thought of him getting old and die brings on a anxiety and sadness only a human child could have create - to me without a doubt is a karmic relationship.


Posted by Jennifer Chan at 3:39 PM No comments:

Thanksgiving had just passed, and aside from being stuffed with turkey it also led the way for a long series of official and non-official holidays in United States.  Official holidays are the ones we all know about, such as Thanksgiving, Christmas, and New Years.  Unofficial ones are the ones we all came to know as we got older, such as the New Brown Thursday, Black Friday Deals, Cyber Monday deals, McDonald and Macys Thanksgiving Parade.

I was fortunate to experience one of those unofficial holidays this past Thanksgiving.  No, I'm not talking about the Brown Thursday shopping, although I did do that as well.  I marched down States Street in the McDonald Thanksgiving Parade.  My friend Julie's Dad has a Kung Fu school, and they were invited to the parade this year.  They had been to the parade for the last few years, and I was more than happy to join them this year on state street.

We woke up at 6:30am to got to the parade by 9am.  Although we were 36th in line, we had to get dressed and be ready to go.  We were all concerned about the weather for the parade, but fate just like how it put me in the parade gave us a beautiful bright sun to keep us from the cold.  I, along with eight other people paraded down the state street with our dragon dance.  Each of us held a stick to control a portion of the dragon body, and with our control we were able to manipulate the dragon like a puppet, creating snake like movement that made a wave from head to tail.  When we do stop, we also created varies formations, such as mountain where we piled up behind each other to create a mountain formation.  Or under or over, where the dragon ran toward it's body and either jumped over or went underneath.  That was a difficult stunt as we had to support the weight of the dragon, while paying attention to where we are jumping or went underneath the dragon body.

At the end of the 10 minute march - pass the huddled crowds, pass the "Smile, you are on camera" sign that indicated we were being filmed, and passed the live broadcasting that announced we had just passed by - I was huffing and puffing soaked with sweat, but couldn't wait to be invited for next year.  I knew I was going to be spending Thanksgiving with my family, but I never imagined to be marching down state street in a thanksgiving parade.  This spontaneous experience made life so much more interesting and fun.

Below is a picture collage we took before the parade, I'm in the top left picture in the brown scarf. 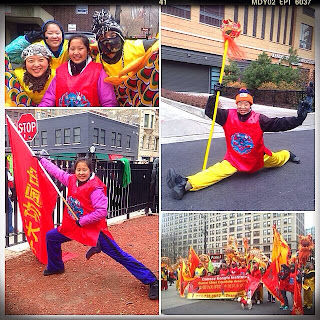 Thanks for visiting my blog!! Thanks for reading.
Jennifer
Posted by Jennifer Chan at 4:51 PM No comments: