Our end goals at CACBC is to create friendship between America and China, even if the only lives we touches are the kids in bands, choirs and orchestras.

Today I am overwhelmed with happiness knowing one of our past schools (Pioneer High School in Ann Arbor Michigan) have done just that.  Their band traveled to China in 2009 under the direction of David Leach, and on that 10 day tour to Beijing and Tianjin, they visited a Tianjin High School as part of their cultural exchange.  Five years later they have continued that friendship through their cultural exchange, and have brought a student delegate from that school to come and visit Pioneer High School.

It's moments like this that makes what I do so worth it.  To create friendship across continents, to create endless possibilities for what could be achieved.  It makes me so proud of them, so honored to have brought them together.  I wish these two schools good luck in their networking, and their ventures together.

Here is some of their pictures while in China.

One of the many favorite food eaten during the Chinese New Year is the Chinese Dumpling.  Chinese dumpling is just like anyother dumpling, it has a outside skin that holds in the filling inside.  The fillings consist of meat, vegetable, or a combination.

Every time I travel to China or goes to Chinatown in the states, I always try to get some sort of dumpling.  I love a home made dumplings, the taste and the feeling of eating it just makes me so happy.  Some of my most cherished memories were of getting together with my family and putting fillings inside dumpling skin.  I remember looking up at my mom putting in the ingredients, then when it's ready for me to put it on the skin, I would be more than happy to help.  Perhaps it's those memories that makes me want to continue this tradition, which I will pass on to my kids.

Back in the days before restaurants and frozen food were created, dumplings were made only on special occasions such as Chinese New Year.  But today because everyone is busy, most people just buys them from the grocery store or from restaurants.

Today when I woke up, I knew I had to eat a dumpling.  I had a dream I was eating dumplings, and when I woke up I told myself I have to eat it even if I had to make it from scratch.  Which is exactly what I did.  I made Pork and Chive dumpling, one of my favorites.  I didn't have a recipe with measurement, instead I just throw a pinch of this and a batch of that.  The taste was kind of blend.  I believe I didn't use enough salt, soy sauce and sesame oil, because the taste was dry and blend.  So for my next batch I added more of those along with onion, and it tasted wonderful.


Here is a photo collage for you to see the process of making my dumplings.  Clockwise from top left:  Ingredients (although I did add onion and sesame oil), mixing everything in a bowl(except for the egg, the egg yoke is useless but the whites is used to stick the dumpling skin together), putting filling inside the dumpling skin and kneeing the edges together, then boil it till it's cooked.  You can mix any number of sauces to dip your dumplings in, it all depends on what your taste buds like.  For example I like the vinegar taste, so i mixed soy sauce, vinegar, and sesame oil for mine.

Until next time, I'm going to go eat some more! 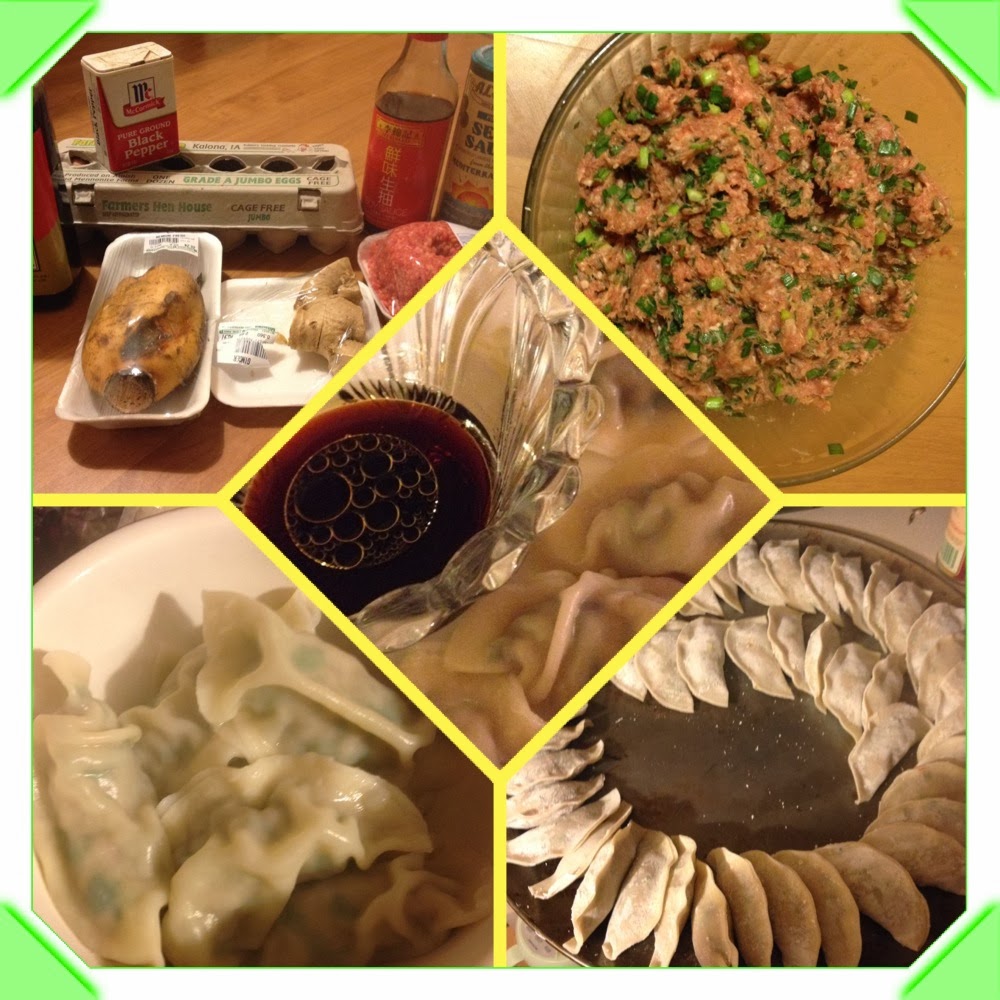 Posted by Jennifer Chan at 8:20 PM No comments:

For those who have an Ipad I wanted to share with you an amazing App I just discovered.  It is called "Asia Radio".  Asia Radio broadcast radio stations in Asia, countries such as Korea, China, Hong Kong & Taiwan, Indonesia, Japan, Philippines, Singapore & Malaysia, India, Thailand, and Vietnam.  I have been listening to the China radio stations, and even favorite some of the ones I liked.  I understand Chinese so I don't have any problem listening to any of the radio stations, but for those who don't understand there are still music stations you could listen to.  You just have to play around and see which ones you like.

I started listening to the follow if you like to check it out.  But if you are listening in the day time just know that you might not get the regular broadcast because China is 14 hours ahead of us, so they are sleeping.

Posted by Jennifer Chan at 12:24 PM No comments:

Happy New Year!! I hope 2014 will bring all of you Happiness, love, luck and Health.


Posted by Jennifer Chan at 4:09 AM No comments: